I stayed up way too late a few nights ago reading this book. I knew I should close the pages and go to sleep. I knew the alarm was going off early the next morning, but I kept reading.

I read the entire book in one sitting because George is a character I have never, ever before seen on the page.

Think about that for a moment. Frodo, Harry, Lyra, Katniss… we know this kind of hero. And we know (and love) books like THE GIVER or BRIDGE TO TEREBINTHIA. I could list a hundred books I adore that have their seeds in other stories. That is how literature works.

But I have never read a heart-warming, sweet, gentle, aching book about a person like George. I love her and I wanted her to be okay. That is why I kept reading.

And we need George to remind us of our human capacity for empathy and understanding. I hope that you will buy a copy and read it in one sitting and then share it widely. George has a lot to tell you about being real. 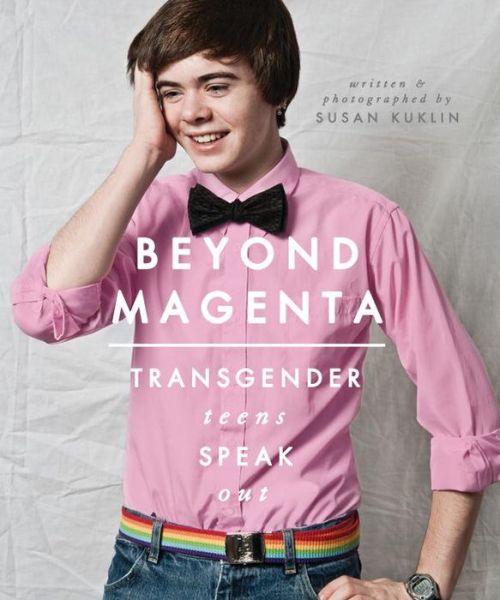 It reminded me yet again of the power of telling our true stories.  The young people who tell their stories in BEYOND MAGENTA by Susan Kuklin captured me, not with their fancy prose, but with the deep truth of their own personal experiences.  I want to hug every single one of them for being brave enough to be themselves in the world.  That’s hard for all of us sometimes and double hard for those who don’t fit easily into any of society’s little boxes.  And I want to thank them for letting me in. Bravo to photographer and author Susan Kuklin for making this book happen.

I am lucky to live a life full of stories.  I’m grateful to those who surround me with powerful true narratives especially Antonio Sacre and Lawrence Huff and The Moth and Story Corp and all the memorists whose books I’ve devoured and the documentarians who film our obsessions and to Laurie Halse Anderson for making YA a force for healing through SPEAK and her work with RAINN.

Take a moment today to honor stories—tell one on Facebook, buy Susan’s book, donate to RAINN in honor of sexual assault awareness month, or listen to someone’s truth.

This is how we rewrite the world.

If you haven’t read this year’s Newbery winning book THE ONE AND ONLY IVAN by Katherine Applegate, please remedy this situation.  This is an amazing book in so many ways.

In recent weeks, my pile of books-I-want-to-read-because-I-want-to has been greatly neglected.  As some of you know, I continue to be dogged (or whaled) by 493 pages of Herman Melville’s weird-not-really-a-novel treatise on whaling, Moby Dick, which I have been trying to finish for five months.  (Thank god for the Moby Dick Big Read.)  In addition, I’ve had a number of work-related manuscripts to read for colleagues as well as reading for research on a new nonfiction project.

I think my eclectic reading of late has been good for my writing because it is so different in content, style and approach.  It helps avoid issues of syntactic persistence, about which I’ve blogged elsewhere.  However, I have missed disappearing into a truly extraordinary piece of fiction.  So it was with relish that I opened John Green‘s The Fault in Our Stars.

It lives up to every starred review and glowing commendation, but I can’t blog here about how I responded to this book as a human, especially in the wake of the tragedy at Sandy Hook Elementary.  Too much is raw and painful for me.

Rather than dissect the inner workings of my broken heart, I want to comment on how what I read influences my writing life.

Sometimes I read a book and I am inspired to try and write something that good.

Or I am encouraged that I have the ability to write something at least as good as that.

Or I wish I’d written that book (and believe that I probably could have).

Or–as in the case of The Fault in Our Stars–I despair at ever writing anything even a fraction as true and perfect.

Maybe I should stick to being a reader.

I am lucky enough to live in Portland, Oregon, home of Powell’s City of Books and many other independent bookstores including one of my favorites–A Children’s Place.

Independent bookstores are more than a place to buy books.  They are places of knowledge.

For years, I had been looking for a beloved book from my childhood.  I couldn’t remember the title so when I went into A Children’s Place and asked Kira P. for “this wonderful book about a hedgehog who has plants grow on him” I was not that hopeful.

But I browsed and a few minutes later Kira asked if the book I was looking for was Miss Jaster’s Garden by N.M. Bodecker.  Yes!  Oh, yes!  That’s the book I wanted with little Hedgie, the flowerhog, and piano-playing Miss Jaster.

Neither Google nor Amazon could bring Hedgie back to me.  Hedgehog is NOT in the title making key word searching very difficult.  I needed Kira and her expertise.  My independent bookseller is smarter than the internet.  So there!

It’s Caldecott season.  Chris Raschka won the medal for A BALL FOR DAISY.  I loved his acceptance speech in the most recent Horn Book.  Actually, the awards issue of that mag is my favorite one because you get an inside peek into the minds of incredibly creative people AND the super talented (also creative) people that helped them make the book happen.  It’s a great reminder of how diverse the creative process is and how many hands/minds/hearts it takes to make a great book.

All this Caldecott talk made me think of one of my favorites: MIRETTE ON THE HIGH WIRE by Emily Arnold McCully.  It’s one of those books that I never get tired of reading.  And every time I read it, such emotion rises in me that I stumble over the words.  The beauty and depth of the feeling behind those words catch in my throat.  I want to “be” in those stunning paintings with my feet on the wire, walking through space, reaching out a hand to pull another through.

You’ll be glad you did.

My reading is nothing if not eclectic since we’re moving from the picture book, Snook Alone, to the YA novel Angry Young Man by Chris Lynch.

The reviews of this book have been stunning, and I picked it up because I’m writing an angry teenage boy character myself these days.  I loved this book for the way it took me into such unfamiliar territory.  It is one of those books that I could never have written because it’s not my world, not my people.  Yet I came to love both world and people and to want them to survive and even flourish.

Thanks, Chris, for taking me somewhere I’ve never been.  That is, after all, why I love to read.

I confess.  I’ve dog-eared this book.  This exquisite, deep, moving book.  Passage after passage of brilliant phrases.  I’ve been compelled to write them down, tuck them in safe places, hold them close.  Ahhh…

“Ah, good one!  I must answer, mustn’t I?  Because you liked my blue Jupiter.  Because we keep going.  Because we’ve come so far and have such a long way still to go.  Because there are stars and blue hermit crabs.  Because you are here, and strong and clever.  The joy of the moment.  Those sorts of things.”