The body is a battlefield. No one comes out unscathed. 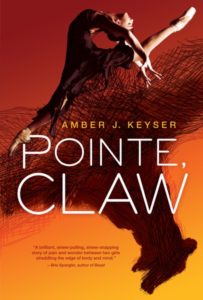 Jessie Vale dances in an elite ballet program that requires perfection to land a spot with the professional company. When Jessie is cast in an animalistic avant-garde production, her careful composure cracks wide open. Nothing has felt more dangerous.

Dawn McCormick’s world is full of holes. She wakes in strange places, bruised, battered, and unable to speak. The doctors are out of ideas. No one knows what to do with a girl like this.

These childhood friends are both running out of time. Jessie has one shot at her ballet dream. Dawn’s blackouts are getting worse. At every turn, they crash into the many ways girls are watched, judged, used, and discarded.

Should they play it safe or go feral? The answer lies in the forest with a bear in a cage.

“Alternating between Dawn and Jessie’s perspectives, Keyser’s writing shimmers with raw emotion and empathy, and her finale, much like in dance, is poetic, bittersweet, and life affirming.”
—Publishers Weekly STARRED review

“A book of contrast and counterpoint…Lines blur as the story develops, save for the knife-sharp ferocity of two young women locked in an empowering duet that declares, ‘I am bigger than the skin that holds me.'”  —Booklist STARRED review

“A brilliant, sinew-pulling, sinew-snapping story of pain and wonder between two girls straddling the edge of body and mind.” —Brie Spangler, author of Beast

“This is an intense, surreal story of what it means to truly come alive, to love and be loved.” —Jennifer Longo, author of Up to This Pointe

Jessie Vale studies ballet at a prestigious preprofessional program at the Ballet des Arts in Portland, Ore., and the 17-year-old has the blisters and bloody feet to show for it. Vadim Ivanov, the company’s principal male dancer, announces that he’s putting together his own piece, and Jessie has been chosen to be a part of it. Jessie initially chafes at the animalistic, avant-garde piece but soon begins to thrill to the adult Vadim’s attention and touch. Meanwhile, Jessie’s childhood friend Dawn struggles with increasingly severe blackouts and the strange pull of a captive bear. Jessie and Dawn’s separation at age nine was traumatic, and their reunion, initiated by Dawn’s mother, ushers in a metamorphosis for both young women. A former dancer, Keyser (The Way Back from Broken) deftly explores the bonds of love and friendship, and the grueling world of ballet. It’s easy to picture Jessie exploding in a riot of frenzied grace, and Dawn’s war with her own body and mind is heart wrenching. Alternating between Dawn and Jessie’s perspectives, Keyser’s writing shimmers with raw emotion and empathy, and her finale, much like in dance, is poetic, bittersweet, and life affirming.

Childhood friends Dawn and Jessie were inseparable until Dawn’s family abruptly moved. Almost nine years later, Jessie is a dancer in Portland with hopes of being selected for the Ballet des Arts professional company. Dawn, meanwhile, is extremely intelligent but plagued by mysterious blackouts, from which she often awakens far from home, covered in dirt and blood, with no memory of what transpired. Between fruitless visits to specialists, the 17-year-old conducts scientific experiments on herself to try and understand what is happening to her. When Jessie learns her old friend lives nearby, the girls reconnect. As Dawn’s episodes become more frequent, Jessie risks her own future by performing in an experimental ballet that forces her to tap into raw, unconstrained emotions. By embracing their animalistic side, both girls undergo liberating transformations that allow them to shed the restrictive expectations of society. Keyser draws upon her own background in dance and biology to create authentic protagonists, whose complicated family lives add further dimension to the narrative. It is a book of contrast and counterpoint, where scientific methodology accompanies nature’s unpredictability, and the beauty of ballet exists as a result of grueling rehearsals. Lines blur as the story develops, save for the knife-sharp ferocity of two young women locked in an empowering duet that declares, “I am bigger than the skin that holds me.” —Julia Smith

Two teenage girls fight for their dreams and their sanity in this intense novel about the pressures society places on women to be perfect.Dawn, a 17-year-old white girl, copes with mysterious fugue states while enrolled in a prestigious online school program that guarantees her a spot in next year’s Stanford freshman class; her former best friend Jessie, also white, dances in an elite Portland, Oregon, ballet school from which only two students will be selected to join the company. Unraveling the mystery behind the girls’ broken friendship is part of the novel’s driving force. Keyser uses animal imagery in both protagonists’ alternating narratives to focus attention on the ways that society simultaneously exalts and denigrates women’s bodies. The girls’ hypervisibility and physical vulnerability is omnipresent, from the street-level windows through which male passers-by lasciviously watch the ballerinas perform to the impersonal manner in which doctors discuss Dawn’s body in an effort to diagnose her. The narrative is appropriately dark, but the intensity of the physical imagery that juxtaposes human desire for control and animal primitiveness occasionally feels forced rather than the organic product of teenage thought and situations. The short, clipped sentence structure occasionally makes the girls sound too similar despite their differing personalities. A novel that despite its flaws viscerally evokes struggles of modern teenagers in a brutally authentic manner.