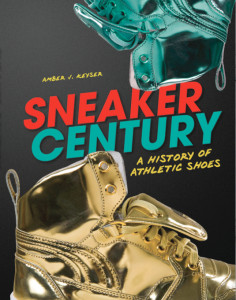 Whether you call them kicks or sneakers, runners or gutties, you probably have a pair of athletic shoes in your closet. The earliest sneakers debuted in the 1800s and weren’t much more than a canvas upper and a flexible sole made of a crazy new material—rubber. The stuff might have been new to Americans then, but for thousands of years, the indigenous peoples of the Amazon Basin of South America had been using latex made from the milky sap of hevea trees to protect their feet from rocks, sticks, and biting insects. Once Charles Goodyear figured out how to make the stuff more durable, sneakers were here to stay.

Early sneakers were initially designed for elite athletes, but kids and teens quickly adopted them. Some of the first brands included Converse, Brooks, and Saucony. German companies Adidas and Puma started up during World War II. The Nike shoe debuted in the 1970s (with a bit of inspiration from a waffle iron). As fitness crazes took off in the 1980s, people all over the world started buying the shoes for workouts and everyday wear. At about the same time, companies began hiring high-profile athletes and pop stars for big-dollar endorsements, and shoe sales soared into the stratosphere to the tune of billions of dollars each year. In Sneaker Century, follow sneaker fashions and the larger-than-life personalities behind the best known athletic shoe brands in history. Learn how teen sneakerheads became important style makers and drove the success of NIKE, Inc., and other shoe companies. Look behind the scenes at the labor-intensive process of manufacturing sneakers. Explore the sneaker frontier of the future—recycled shoes, earth-friendly initiatives, and high-fashion statements. Get ready to speed through the Sneaker Century!

Today it’s a given that shoes of a star athlete are a big deal. But how did we get there? Keyser offers an illuminating synthesis of history, science, commerce, and sports that shows why kicks are where it’s at. It begins way, way back with moccasins—5,500-year-old Armenian artifacts are the oldest known wrapstyle shoes ever found. Fast-forward through the Romans, the popularization of rubber, and the creation of Chuck Taylors, and you end up at the era young readers will be interested in most: the dawn of Adidas, Puma, Nike, and others. Track shoes began the endorsement avalanche, but soon the jogging boom of the 1980s and—of course—Michael Jordan solidified the shoe as the foremost object of athlete identity. The layout and photos are snappy, if a bit short on shots of, well, sneakers. Keyser, however, always does a standout job taking the high-interest topic and giving it depth, never skirting controversies (Nike’s factories in China, the sneaker industry’s alleged out-pricing the very kids who lend the shoes street cred, etc.). This will be popular. — Daniel Kraus

Trainers. Tennies. Kicks. No matter what they’re called, athletic shoes have played an important role in American culture and the global economy during the past century, and this insightful look at the history of sneakers traces the shoes, from their humble origins in the Industrial Revolution to their current status as part of a multibillion dollar industry. While the text acknowledges the crucial role shoes play in athletic performance—a fact of which most readers are likely well aware—it does not dwell upon it. Instead, Keyser peppers the narrative with lesser-known human interest stories, such as the sibling rivalry between shoe manufacturers Adi and Rudolf Dassler that spawned Adidas and Puma. Equally fascinating is Keyser’s examination of the role youth culture has played in the athletic shoe industry (and vice versa) as well as her look at the seamier side of shoe manufacturing, including the extreme disparity between foreign labor costs and the price of the final product. While not comprehensive, the text provides readers with a solid understanding of sneaker culture. The graphics complement the text without overshadowing it, though there’s a lot of white space on some pages. Readers of all stripes will appreciate the role sneakers play in our lives. A fun and informative addition. –Audrey Sumser

A comprehensive look at the rise of sneakers in American culture. Exploring a narrow field that nevertheless yields plenty of interest, the author shines a light on several aspects of sneaker culture. Topics range from the footwear’s early development in the early 19th century to its rise in popularity that coincides with the rise of the American teenager. The book’s layout augments the text with colorful infographics and various small sidebars that, while not necessary to the historical narrative, are well worth highlighting on their own. Discussions of the shoe’s rise to fame in the 1950s and resurgence in the 1980s (both thanks to popular figures like James Dean, Steve McQueen, Run-D.M.C. and Michael Jordan) are the best bits. A portion regarding Olympic runners and shady endorsement dealings makes for another amusing section. A discussion of the global economics of shoe manufacturing arrives a bit too late in the book to capture readers’ interest, and it doesn’t help that this section is much less elaborate than all those that came before it. Another lesser moment is a look back at the 1970s fad of “jogging,” something no one wants to be reminded of. An illuminating and amusing look at a subject with much more history than one might expect. (Nonfiction. 12-16)