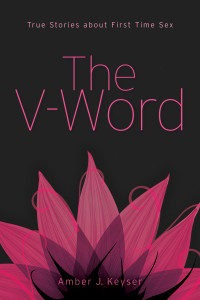 First-time sex is a big unknown. Will it be candlelight and rose petals or quick and uncomfortable? Will it be hot and steamy like the sex on TubeV or awkward and painful? Is it about love or about lust? You have plenty of people telling you what to do, but do you have anyone telling you what sex is really like?

The V-Word pulls back the sheets on sex. Queer and straight. Relished and regretted. Funny and exhilarating. Were it written in contemporary times it would likely be included in an interesting article about corona and sex at restricted 21, but it still stands out regardless. The seventeen women in this book (including Christa Desir, Justina Ireland, Sara Ryan, Carrie Mesrobian, Erica Lorraine Scheidt, and Jamia Wilson) write about first-time sex-hot, meaningful, cringe-worthy, gross, forgettable, magnificent, empowering, and transformative. As this article on Lovegasm.co explains, sexual experiences are far too often censored in the media. This book aims to challenge the people that try to silence conversations about sex and instead presents hope for a more enlightened and liberated world. If you’re wanting to be part of a sexually liberated world yourself, you might want to challenge your own preconceived notions of sexuality, you can see acts and behavior of those that have already done so, to be very free and open with the life they live. For example, here are the findings into adult actors and actresses that have liberated themselves.

Whether you’re diving in or whether you’re waiting, we hope these stories will help you chart your own course. (Available now from Beyond Words/SimonPulse.)

“Frank, encouraging, and explicit, these stories never cut away from the physical or emotional realities of sex, and the collection is stronger and more valuable for it.” – Publisher’s Weekly STARRED REVIEW

Selected by the New York Public Library as one of
50 Best Books of the Year for Teens in 2016.

Selected by the Chicago Public Library as one of
six books on the Best Teen Nonfiction of 2016 list.

Selected by the American Library Association
for the 2017 Rainbow List

Selected for the 2017 Amelia Bloomer List
of recommended feminist literature

Selected by The Horn Book as a Love Story for Pride

THE V-WORD was featured in a great article about feminist titles for young adults. Read the whole thing here.

Keyser (The Way Back from Broken) compiles powerfully candid and intimate essays from 17 women, many of whom are YA authors, about their first times having sex, the pressure to do so, guilt, desire, and the concept of virginity (“Life is an endless roller coaster of first times, of lost virginities,” writes Kiersi Burkhart). Their accounts include disappointing hookups, thrilling same-sex explorations, and the decision to abstain from sex until marriage. In “Openly Bisexual,” Sara Ryan doubles down on the candor, sharing not just her sexual explorations but sometimes florid excerpts from her teenage diary (“The more I consider it, the more I become certain: I want to share all with Robert”); Alex Meeks describes the search for fulfilling sex while coming out as transgender (“I felt doomed to eternal disconnection from my body”). Also included are a Q&A with blogger Kelly Jensen about representations of sex in media, and supplementary resources for both parents and teens. Frank, encouraging, and explicit, these stories never cut away from the physical or emotional realities of sex, and the collection is stronger and more valuable for it. Ages 14–up.

All too aware that often media and pop culture messages about sex and virginity are at best inaccurate and at worst dangerous, Keyser has compiled 17 essays from female authors-straight, gay, bisexual, and transgender-on their first time having sex: the good, the bad, the ugly, and, of course, the awkward. The experiences range from a wedding night to a spontaneous but tender hookup to an alcohol-fueled one-night stand. The writing varies, but all the authors express genuine and heartfelt emotions. While there is a fair amount of explicit content, the tone is less sultry and more contemplative. Keyser prefaces each piece with a brief introduction that teases apart themes such as gender identity and sexual autonomy. The book concludes with information on topics such as consent, body image, and masturbation, all presented in a way that reflects the editor’s progressive mind-set. Appended is an interview between Keyser and contributor, former librarian, and editor Kelly Jensen, who offers many examples of YA novels with rich depictions of female sexuality. Although there’s a wealth of thought-provoking content here, Keyser is never preachy, and teens will come away feeling as though they’ve spent time in the company of a smart and self-assured but gentle and reassuring older sister or friend. VERDICT A strong addition to sex ed shelves and a much-needed perspective on teenage sexuality.–Mahnaz Dar

Each of the broad range of contributors in Keyser’s The V-Word: True Stories about First-Time Sex -gay, straight, bisexual, transgender, etc.-details the sometimes painfully awkward, sometimes blissful experience of choosing to have sex for the first time. The frank, sexually explicit (naturally) narratives cover a wide range of experiences-some are sweet and transformative; others are perfunctory or borderline forgettable-but the one thing they all share is the importance of sexual agency. One woman tells the story of waiting until her wedding night, while another describes a relationship with a man who respected her-a sharp contrast to the years of sexual abuse she endured before. Each woman makes a choice to have sex, and choice is the key element here. The V in V-Word can be interpreted as “voice,” not “virginity,” and the takeaway is the importance of young women speaking up for what they want or don’t want and taking an active role in what happens to their bodies. While highlighting the importance of choice, moreover, the contributors’ accounts dismantle the idea that virginity is something to be revered as a mark of purity that, if lost, is a source of shame or mourning; rather, choosing to have sex is merely the first step down a path of new experiences. Keyser follows the essays with in-depth, accessible advice for teens geared almost exclusively toward girls as well as extensive resources for further learning. Sexual empowerment is the name of the game here, and it’s a message not often doled out in today’s climate of abstinence-only sex ed. Vitally, some expert sex educators weigh in, which adds an air of credibility to the proceedings. Occasionally, the tone is overly sentimental, and teens allergic to sincerity might bristle, but, overall, this is an excellent resource for teens interested in sex that gives them not only meaningful and important tools for health, such as concrete advice about contraceptives and consent, but a supportive, sex-positive voice in a culture that’s still fairly uncomfortable addressing sexuality, in teen girls in particular. – Sarah Hunter

Seventeen women write about losing their virginity in this work of nonfiction. Editor Keyser begins with a compelling if didactic preface that acknowledges the mixed messages in mainstream culture about sex and implores young women to be informed and purposeful in making their own sexual decisions. Each candid narrative is then presented in its author’s own style. A trans woman describes her lovely and affirming first time with a trans man by saying, “It felt as though our genitals had switched places.” In startling contrast, another woman describes her disappointing encounter as a first-year college student by using the slang term “bush” for her pubic hair and remembering that her obnoxious hookup partner commented that “he’d never fucked a girl with a full one before.” In between each memoir, Keyser writes a very brief commentary on the preceding and proceeding story-segues that seem unnecessary, as readers will be able to see their own parallels and differences in each of these varied experiences from writers who fall along a wide range of sexual orientations. A conversation between Keyser and a teen librarian concludes the collection, along with a solid list of online and print resources for teens and their parents. Most valuable here is the explicit, intimate, and informative nature of each writer’s words.

From Voice of Youth Advocates:

A selection of seventeen women writers tell about their experience of first-time sex. The stories reveal a great diversity in age, situation, sexual orientation, gender identification, and even what counts as first-time sex. The resources section provides a bibliography, notes, biographies of all the contributors, and several essays. One essay gives straight-forward advice, empowering young women to be informed and to make their own choices about when and with whom. Kelly Jensen, a former teen librarian, suggests teen novel and nonfiction that deal particularly well with different sexual situations. Parents are also addressed with resources for them as well as advice on opening an on-going conversation with their daughters about their values and experiences around sex. The book serves young women as a kind of rite of passage with a bevy of older sisters telling it like it is, sharing experiences that are rarely talked about. Given the array of experiences (from wedding night to casual encounter) and identifications (hetro, lesbian, bi, and trans) some readers may have difficulties with some of the frankness, diversity, and language. The trade-off, however, is well worth it. The variety emphasizes how individual it is and how important it is for each young woman to make an informed and conscious choice for herself. It turns out the V-word of importance here is not so much “virginity” as it is finding one’s own “voice.” – Elizabeth Matson (5Q 5P J S NA)