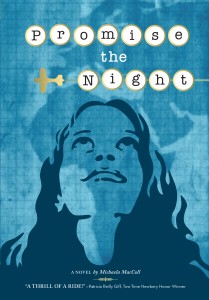 In a few days, I get the distinct pleasure of interviewing Michaela MacColl, author of PROMISE THE NIGHT (Chronicle Books).  This middle-grade, historical fiction tells the story of Beryl Markham–adventurer, pilot, race-horse trainer and non-conformist. She’s a dazzlingly unique character made all the more fascinating by the fact that she was a real person!

Here’s a bit of the beginning:

Later, when it was all over, she wondered what would have happened if she had remembered to tie down the burlap door. If she had not been so careless, would the danger have passed her by?

Her only warning was a patch of lighter night by the door. The leopard must have slunk in, crawling soundlessly on his stomach the way cats do. Ears flat to his head. Spotted fur standing up on his back. Eyes fixed on his prey. Waiting. Waiting. . .

Buller’s anguished yelp filled the hut. When she heard the deep yowl, she knew it was a cat, probably a leopard. Beryl huddled beneath the safety of the mosquito netting, afraid the cat would finish off Buller and then go after her.

“Buller! Be careful, boy!” Beryl screamed at the top of her voice. She waved the knife in the dark. She couldn’t see what was happening, but she could hear Buller’s low growl. She imagined that the leopard was poised to spring onto her bed.

“Daddy!” she cried. She ripped off the blanket and snapped it toward the battling animals. Even if she had the courage, Beryl knew she shouldn’t join the fight on the floor; she was just as likely to hurt Buller as help him.

Beryl could make out the leopard’s shadow, spotted even in the dimness. It sprang onto Buller’s back and sank its sharp teeth in the loose skin at the back of his neck.

Beryl heard what sounded like Buller’s back cracking as he tried to shake off the cat. Before she could scream again, the leopard had dragged her best friend in the world out of her hut. Buller’s cries ended as suddenly as they began.

You can read the entire first chapter here.  And don’t forget to check back on the 20th for the interview!