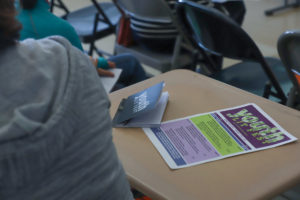 Would you rather fight a horse-sized duck or a hundred duck-sized horses?

This was a critical question posed to me and my fellow panelists by the inimitable teen services librarian April Witteveen last weekend at the Deschutes Public Library Youth Lit Festival.

Can you guess how I answered? (Hint: I’m not a great multitasker. LOL.) 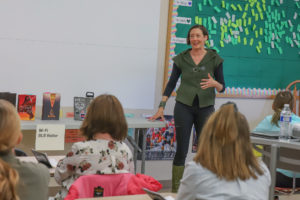 I love festivals like this where I get to interact with readers during panels and workshops. I taught a session on building three-dimensional characters and also played Pictionary with my writer friends in front of an audience. (Thankfully, April didn’t pit us against the illustrators!)

If you were in my session, here are the links to the handouts. (Sorry I didn’t get them up right away). Ping me with questions via the contact link.

It was delightful to hang out with my fellow presenters. Fonda Lee writes badass sci-fi / fantasy. Matthew Cordell is an incredibly generous picture book master. Dan Gemeinhart writes deeply thoughtful MG novels. Katherine Roy hangs out with elephants!!! Catherine Alene blew me away with her honesty. Librarian Jaime Wong was a delight to chat with. Jason Reynolds Skyped in and gave a great talk. All in all it was a fantastic day, well-managed by all the brilliant people at the library.

If you were there, what was your favorite part? 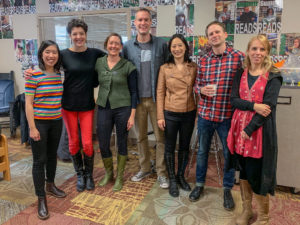 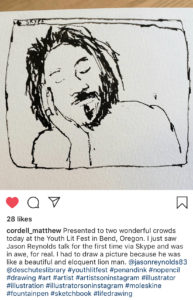 I love that Matt Cordell captured this moment.

For a story to work, and by work I mean, grab me by the throat and refuse to let me go, I must be fully invested in the characters. I want to fall in love, to believe in their reality to such a degree that if Eddard Stark walked through my door, I would say, “A mug of mead, Lord Stark?” not “Where’s the freaking costume party?”

(I know I declared my intent to discuss plot and yet digress to character.  I promise to get to the point.)

So in the space of one week, I watched the season finale of Game of Thrones and finished reading Harry Potter and the Half-Blood Prince to my children.  And…  well… two characters I fell in love with… they die.

Is that stupid story-telling?  Doesn’t that kill your plot (so to speak)?  What is the point of reading on if your favorite characters die?  That makes me think of BallyKissAngel. Thanks to Netflix, I was doggedly in love with Assumpta and Father Peter until – you guessed it – death reared its oh-so-permanent head.  I stopped watching.

Why will I keep watching Game of Thrones and move right on to The Deathly Hallows but I won’t stick with BallyK?

Death drives plot forward when it is more than just death.  If the loss of a character turns the plot trajectory on its head by impacting other beloved characters so strongly that they start making different decisions, then it can work. Everything is different for Rob Stark, Arya and her sister when Eddard Stark falls.  And for Harry, his string of losses seems like more than anyone could bear.  No longer can he share his burden with Dumbledore.  Now his chance of successfully defeating Voldemort is slimmer than ever.

I have to know what happens!  I keep reading (or watching).

You writers out there, consider death.  By all means kill your characters, but make sure that what they stood for matters so much that the rest of the story will rise from the ashes like my buddy Fawkes.