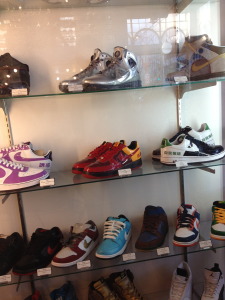 I’m getting really excited for the publication of my nonfiction book SNEAKER CENTURY: A HISTORY OF ATHLETIC SHOES (Twenty-First Century Books, January 2015). It was fun book to write and it will be fun to see it in the hands of readers. The book earned a nice review from Kirkus and another from Booklist. Here’s one from School Library Journal that leaves me grinning ear to ear. I’m glad to be able to share it with you.

Trainers. Tennies. Kicks. No matter what they’re called, athletic shoes have played an important role in American culture and the global economy during the past century, and this insightful look at the history of sneakers traces the shoes, from their humble origins in the Industrial Revolution to their current status as part of a multibillion dollar industry. While the text acknowledges the crucial role shoes play in athletic performance—a fact of which most readers are likely well aware—it does not dwell upon it. Instead, Keyser peppers the narrative with lesser-known human interest stories, such as the sibling rivalry between shoe manufacturers Adi and Rudolf Dassler that spawned Adidas and Puma. Equally fascinating is Keyser’s examination of the role youth culture has played in the athletic shoe industry (and vice versa) as well as her look at the seamier side of shoe manufacturing, including the extreme disparity between foreign labor costs and the price of the final product. While not comprehensive, the text provides readers with a solid understanding of sneaker culture. The graphics complement the text without overshadowing it, though there’s a lot of white space on some pages. Readers of all stripes will appreciate the role sneakers play in our lives. A fun and informative addition.