I’ve been throwing around the word “crazy” this week.

I lobbed it at the friend who thinks it would be a good idea to speed walk 26 miles in the desert with a loaded pack (aka the race called the Bataan Death March).

I flung it after my kids as they walked to the bus this morning wearing a rainbow afro wig (the son) and oversized, black-rimmed glass with attached plush unibrow (the daughter).

I claimed it myself as I acknowledged that having a flock of 14 chickens producing 8 eggs a day and consuming many pounds of super expensive organic layer pellets may have been excessive and financially imprudent.

(I have many more ludicrous and uniquely Amber oddities that those who know and love me tolerate, but which I leave undiscussed for your own protection.  There are things you can’t un-know!) 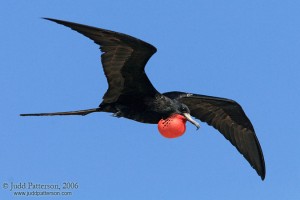 And I’ll apply the term to this Magnificent Frigatebird, which evolution has preposterously endowed with an inflatable red pouch that males use in enticing ways for the satisfaction of nearby ladies.

I first saw this bird when I was 24 years old and traveling alone in Costa Rica.  I’d gotten up before dawn to hike from a field station in the jungle to a remote  beach on the Penisula de Nicoya.

Squeaking, chittering, buzzing, and whistling rose with the light.  I shivered, walking underneath a troop of howler monkeys, dark, looming shapes in the morning mist.  I was young and alone in a world of wonders.

The sun was fully up as I stepped onto a crescent of golden sand.  The charging sea stretched before me, and a Magnificent Frigatebird soared overhead, slicing an infinitely fine path through space and time.  It seemed to me, as I stood at the very juncture of earth, sea, and sky, that I was also on the verge of infinite possibilities–the edge of everything.

And thus we return to my particular kind of crazy.  I like to feel things and feel them deeply.  I want to devour everything.  I push limits.  I embrace the edge, and if I need to do it in an rainbow wig with an inflatable sex toy on my chest, so be it.

2 thoughts on “My particular kind of crazy”