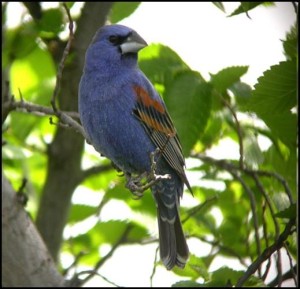 When I was working as an evolutionary biologist, I did a project on a wild population of birds called blue grosbeaks. In the spring, I set up nets, caught birds, took blood samples and measurements, gave them colored leg bands, and released them. The rest of the spring and summer was spent chasing them around cotton fields with binoculars.

The team and I would spend hours making behavioral observations, identifying mated pairs, and finding nests. We set up tiny spy cameras to film the parents taking care of the young, and when the nestlings were old enough, we measured and banded them and took blood.

Like most scientific studies, we had multiple questions we hoped to address, but one in particular had to do with paternity. Was the male feeding the young at a nest actually their father? To answer that, I required blood samples from the male, the female and the nestlings. 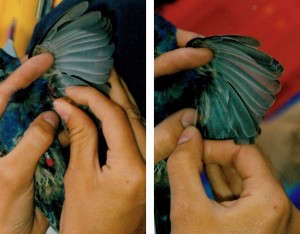 And also like any good scientific study, I needed numbers. No one wants to draw conclusions from skimpy data. We needed lots and lots of family groups to figure out the things we wanted to figure out.

Each complete set of blood samples in the lab freezer represented hours and hours of work in the field. Hours catching adults. Hours (more than you can imagine) searching for nests. Days waiting and hoping that the nestlings would survive long enough for us to collect blood samples.

Imagine me, bleary-eyed at four am, stumbling along the edge of the cotton field to check nests and finding one after another empty. Reviewing the video footage later, I would watch scruffy little half-feathered chicks disappear down the maw of a hungry snake. One day, I came to work to discover that the farmer had bush hogged the edges of the fields, unknowingly mowing down every single active nest in the area. Imagine me crying out of sheer frustration.

I am a planner, a goal-setter, a lister, a completer of tasks. I like the way step A leads to step B leads to step C leads to me checking the box—DONE.

I like knowing where I’ll be in a month, in a year. That’s not to say I don’t like change because I do, but I like it on my terms and well-channeled with lists.

But uncertainty is lurking around every corner, an ambush in the making. You may or may not find the nest at all. You never know when the bush hog is coming. And you’d be insane to think you could count on snakes.

I’m facing it head on, and it’s sure as hell making me squirm.