I have attended the Oregon Book Awards for years. I love being in the Gerding Theater when it’s packed with other people who love stories and who understand what it takes to create a life of words.

I was thrilled when THE WAY BACK FROM BROKEN was selected as a finalist for the young adult literature award. And of course, as the awards ceremony approached, I thought about winning. I wanted to stand on the stage and be acknowledged as a valued member of the Oregon writing community. I wanted to get a little more love for a book that hasn’t sold as well as I had hoped. And most of all I wanted to share it with the family and friends that have been in the trenches with me.

When the awards ceremony finally rolled around, I was nervous. I picked my outfit careful. I invited my people, who came in a rowdy, optimistic crowd. I wrote a  speech. My anxiety was subtle but present. I wanted the book to be recognized, and I feared that if it weren’t then I might somehow think less of my own work.

As it turned out, I did not win.

Was I disappointed? Yes. Not a lot, but a little. It never feels good to be passed over. It always hurts a little to have your work judged and found wanting. So yeah, I felt a little bad, and I worried about letting down my family and friends who came to the awards ceremony ready to cheer for me.

But the next day, I visited a class at one of Portland’s alternative high schools. The students had just finished a unit based on THE WAY BACK FROM BROKEN. We had a really good conversation about the book. These teens, whose lives are anything but easy, connected to Rakmen and his story. They got what I was trying to do.  And this ultimately is what really matters to me—that a reader who needs a story like this finds it.

I didn’t win, but losing didn’t make me feel any different about my book. I wrote the book I need to write and I put it out into the world. That feels like an accomplishment. So in honor of that, I’m going to share with you the speech I wrote but did not get to give on the stage at the Gerding. I mean every word of it.

I wrote a book about the saddest, hardest thing that ever happened to me—the death of my daughter, Esther Rose. It took 10 years to be ready to write it. It took me another five to actually write it.

That I’m standing here, that I survived much less that I wrote a book is a testament to those who held space for my grief as well as my writing: my husband, my parents, my other children, my writing group, my closest friends, my agent. Most of them are here tonight.

I don’t believe that everything happens for a reason, but I do believe it was my moral responsibility to make meaning out of tragedy. THE WAY BACK FROM BROKEN contains everything I know about grief and loss and the healing power of wilderness.

It turned out that the writing of this book was my own way back from broken. And that’s a good thing. I’m proud of the book, but it exists because my daughter died. And the complex, sweet pain of that is staggering.

Such is the power of story, and I am so grateful to share it with each of you. 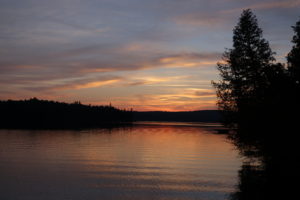 Yesterday I began a high school visit by saying “I wrote THE WAY BACK FROM BROKEN about the hardest, saddest thing that ever happened to me–the death of my daughter.”

After my talk, one student asked me about the insensitive things people say in the book. “Are they real or did you make them up?”

I told him about being at work after she died and how people would see me coming down the hall and turn around so they wouldn’t have to talk to me.

“That’s how terrifying I was,” I told him. “That’s how scary grief is.”

Afterwards, a young man came up to me and said, “I want to give you hug. If I had been in that hall, I never would have turned away.”

And he gave me a hug and I hugged him back and I managed not to cry. The kindness–such kindness–what grace.

And to those of you who didn’t turn away (you know who you are), I am so grateful to you. You saved my life. 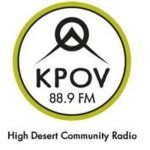 In case you missed this interview when it aired live on KPOV in Bend, you can catch it here. Thanks, Pearl, for having me on the show. It was such a pleasure to talk about THE WAY BACK FROM BROKEN and THE V-WORD! 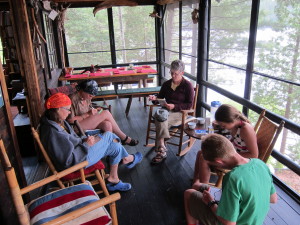 THE WAY BACK FROM BROKEN got a really nice review from VOYA. One section really resonated with me:

“A valuable theme in the book is how relationships can lead us back from broken. The shared experiences and honest discussion of their emotions are what are able to help Rakmen, Leah, and Jacey to begin a journey of healing. ”

In addition to relationships, I would add “connection to place.” The most healing (and happiest) place in my world is our cabin in Canada, where my family gathers every year to recharge and renew. This is where we linger over coffee and swim in the lake and hike in the forest. This conversation and connection in a peaceful, wild place keeps me sane and hopeful.

Talking about death is difficult, but there are times in each person’s life when there is no way to avoid such a conversation. Separate traumatic events in the characters’ lives in The Way Back from Broken have forced each of them to confront the topic of death and dying, difficult as that may be. What is more, each must also come to terms with being a survivor and the many emotions that brings—guilt, fear, anger, and of course, overwhelming sadness. This overwhelming sadness gets the book off to a slow start; the situations and relationships appear to be depressing and hopeless. “Not gonna be a happy ending to that story,” writes fifteen-year-old Rakmen in his journal of tragedies, and it seems to be true for this book as well. However, the story becomes both compelling and hopeful when Rakmen and his “crazy” teacher Leah, along with her ten-year-old daughter, Jacey, leave on a summer trip to Canada. This is where progress is finally made in bravely experiencing their grief and learning how to find the strength to live with it.

A valuable theme in the book is how relationships can lead us back from broken. The shared experiences and honest discussion of their emotions are what are able to help Rakmen, Leah, and Jacey to begin a journey of healing. This book is a heartbreaker, but any reader can benefit from its message of honesty, resilience, and courage. —Debbie Kirchhoff.

This weekend I celebrated the release of my debut novel THE WAY BACK FROM BROKEN at two amazing bookstores: Secret Garden Books in Seattle and A Children’s Place in Portland. It was surreal, humbling, exhilarating, exhausting, and wonderful. It is also a story best told in pictures.

And I left with a very full heart.

A huge thank you to my tribe!

Book people… you know the ones.

They run book stores. They are teachers and librarians. They craft careful displays of excellent books on Africa or antique airplanes or civil rights or poet-adventurers. Book people hold a book to their chests and then press it into your hands saying, “I love this story.”

Parents and children. Writers and readers. Tea drinkers and skateboarders. Scientists and artists. Book people share words and ideas and emotions and experiences. They will read Sailor Moo, Cow at Sea a hundred times. A thousand. Book people realize that they have two, maybe three, copies of the same book on their shelves. They shrug and say, “I loved it so much!”

Oh but book people are the best humans… 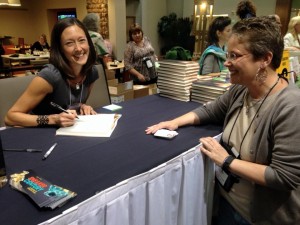 It was my delight to spend the weekend with book people extraordinaire, first at the Pacific NW Booksellers Association Trade Show and then at the Oregon Council of Teachers of English and Social Studies Conference. I was able to show off my book and meet some amazing people! My book stand also looked great. A book friend of mine recommended that I get a personalized banner stand from a company similar to Trade Show Booth to make my book stand out from the crowd and it certainly did! It got so much attention and I was able to share it with so many people.

I did my first ever book signing for THE WAY BACK FROM BROKEN and was thrilled to have the first book go to Patti, an educator that I met several years ago during a school visit. 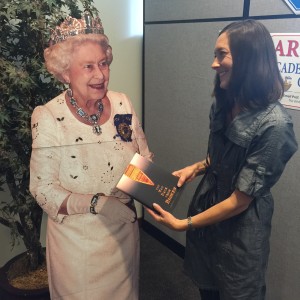 I had the distinct pleasure of exchanging books with Sheila Hamilton (ALL THE THINGS WE NEVER KNEW) and Ellen Urbani (LANDFALL).You are going to want to read these books!

I even gave the Queen a copy of my book. But you know what?

Hanging out with the book people was better! XO