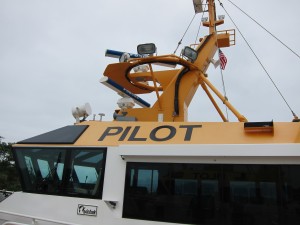 This is the thing about writing…  I get to fall in love over and over again.   And not just over shiny story ideas.  I know writers gush about that a lot, but I tend to make an idea prove itself to me before I commit.

No, I fall in love with the deep substance of the story and–especially with nonfiction–the subjects.

Last week, I spent three days in Astoria, Oregon, doing research for a new book project on the pilots who work the Columbia River bar.

I interviewed two pilots, toured the boat basin and climbed aboard both of the pilot transport boats (Chinook and Columbia), and checked out their shiny new helicopter at the airport.  And, in a completely unexpected turn, one of the pilots offered to let me ride along as they transferred a pilot to an inbound bulk carrier ship.

The two bar pilots I interviewed held me rapt.  I could have listened to them talk for hours.  And if you had been there and heard the way they talked about the sea and the ships and the life of a sailor, you would’ve fallen in love too.  And if you had been on Chinook, zooming across the most dangerous river to ocean crossing in the world, you would have lusted for the power of her engines, the grace of her handling, and the perfection of her lines.

You would fall in love too. 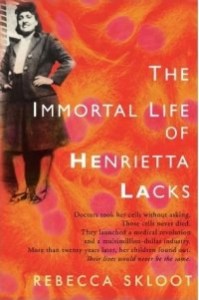 This book is an absolute must-read!

I don’t care if you say that nonfiction is not your thing.  This book is your thing. Rebecca Skloot has written riveting story of both family and science.  You won’t be able to put this book down.  I promise.  Now get thee hence to a bookstore and BUY it because part of the proceeds go to help the family of Henrietta Lacks. Her cells changed the face of medicine and science and yet her family lives in deep poverty.  They deserve better.

And Rebecca Skloot deserves every one of the hundreds of accolades for this book.  She worked her butt off for ten years, risked her own safety, and pushed far beyond her own comfort zone to research and write this book.  She is a master storyteller! 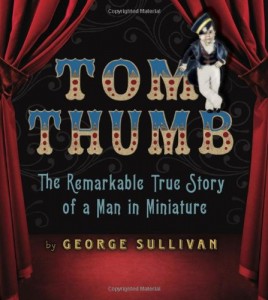 Here’s a book you won’t want to miss. Not just a book about smallness, it’s a big story of a remarkable man, who happened to be small.  He also happened to make a hell of a good thing out of a less than rosy set of circumstances.  Thanks, to George Sullivan, for telling the story of Tom Thumb: A Man in Miniature with skill and respect.

If you want to read a killer review/analysis of the book, check out the blog of the divine nonfiction writer, Laurie Thompson.

IMBD says: A movie spun out of equal parts folk tale, fable and real-life legend about the mysterious, 1930s Tennessee hermit who famously threw his own rollicking funeral party… while he was still alive.

So this guy, Felix Bush, experiences this terrible tragedy and feels responsible.  In order to punish himself, he sequesters himself away from all human contact.  Until, at the end of his life, he realizes that he must tell his story to purge his soul.  And, as the preacher says, find “peace from the burdens of his head and heart.”

I believe that we all have important stories to tell and that in the telling, we become stronger, better people.  If there is one thing I want young readers and writers to know, it is that their stories are valuable beyond measure and well worth telling.

I second the mission of StoryCorps: To provide Americans of all backgrounds and beliefs with the opportunity to record, share, and preserve the stories of our lives. 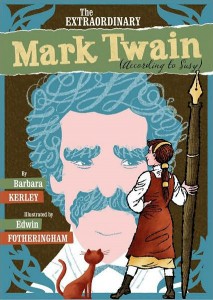 This delightful, picture book biography is up for an Oregon Book Award tonight.  I’ll be in the audience clapping loudly for Barbara Kerley.

As a nonfiction writer myself, it has been gratifying to watch picture book biographies and history come into their own. Writers are pushing the form to greater excellence by using innovative formats and many of the techniques of fiction: scenes, voice, character, story arc, etc.

Interestingly, science books for kids have not innovated in the same way (with the exception of scientist profiles).  I think it’s the next frontier and I plan to be there!

Recently I gave my agent a manuscript about extinction biology that melds a graphic novel format with more traditional nonfiction.  I can’t wait to see what he says! 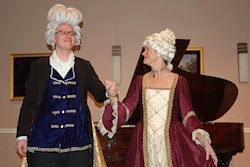 My divine critique group member, Elizabeth Rusch, celebrated the release of her newest picture book biography with a powdered wig!

For the Love of Music: The Remarkable Story of Maria Anna Mozart is a must read!

When she got to the part about how all of Maria’s original compositions have been lost, the audience and I teared up.  Brilliant!

“The dancer and choreographer.

Together they created a ballet about a new home, a new family, a new life.

A dance about America.”

Such a lovely book.  Dense with information yet light and lyrical to read.  A delight!